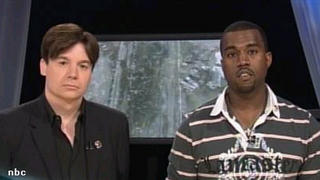 kecian i tgk mike myers kat tepi tuh. hehe.. but kanye west is so serious man.. yalaaaa.. everyone is angry man.. WTF.. after 5 days baru send help.. this is america we’re talking abt man. AMERICA. masa tsunami ari tuh.. i think they r among the first ppl who came to help. Honestly, i do understand why kanye west reacted that way. also chk out the Stars React To Kanye’s Comments. They cut off the whole scene after he said “George Bush doesn’t care about black people,”. Hmm. So much for a country who believes in the freedom of speech.

No more after this…